Aristoles Calm was the Commander of the Helman Second Army, the largest unit of the military superpower created by the Helman Empire. A man from a noble family who was hailed as a prodigy from a young age, spending the majority of his childhood training to become a Commander within the army. Because of his reputation, few people looked at him as a person, with the exception of Prince Patton and his best friend Hubert Lipton, who were eager to have another boy their age to play with, from that moment on becoming inseparable friends. Later, he also came to fall in love with Princess Sheila Helman, who he began courting in secret for some time.

Like Patton, Aristoles grew tired of Helman's Government but, unlike his reckless friend, he considered the best solution to be to reform from the inside, gradually using his influence within the system to change the internal workings of the Empire. Patton attempted to recruit him and invited him to join the Helman Revolutionary Army, but Aristoles, offended that Patton would abandon his sister for several years without alerting her of his survival, refused his offer, creating a rift between the two that has yet to recover.

He made canonical appearance in Rance IX, where Aristoles recieves an item from Hunty which causes Monsters to attack constantly the border between the human and demon realms in the Fort Banra. This is in order to prevent the second army, the most numerous of the Helman armies, from fighting against the rebellion troops.

Aristoles willingly accepts the item and continues to keep the second army busy at the border until he's discovered and forced to flee to the demon realm or face death at the hands of his soldiers.

Unfortunately, he's attacked in the Monster Realm and is found almost dead by Isis, a Kalar, who brings him to the Kalar village in order to recover. There he meets Hunty once more and is able to tell her that their strategy failed and that the second army will join the battle against the rebellion forces before finally passing away. After the events of the Revolution, Bodu succeeds him as the General of the 2nd Army.

Aristoles was a refined, graceful and corteous man that was greatly admired by everyone for his intellect and his skills. He had a short purple hair coupled with rounded glasses and a large face, with a gentlemanly disposition. He sported a large white cape along with the armor of the Helman Knights, which had many of its parts removed to grant him a more comfortable mobility. He's also seen carrying a flower in his hand at all times.

A poet warrior, Aristoles was a quiet and reflective person that enjoyed philosophy and would regularly spend large amounts of time thinking about the coming times. He's a kind-hearted man that is greatly troubled by the future of his country, and even more worried about his friends's well-being. He spent his childhood with the Prince Patton Misnarge and with Hubert Lipton. The three would become friends and spend a lot of time playing together, growing very close. However, time ended up distancing the previously inseparable friends and Aristoles kept to himself for a long time. He is a cold, quiet and thoughtful man who has spent the majority of his life in solitude, creating a sharp contrast with the fiery Patton. Despite his apparent stoicism, the passion for reform burning within him rivals his friend's, though he is much more reserved about it.

At some point Aristoles became enchanted by Patton's younger half-sister Sheila Helman, who was his friend's greatest adversary in the competition for the throne. His love for her is limitless, and would do anything to ensure her safety. He dedicated his life to her and became a devoted knight of the Empress even if it meant going against his friend Patton, who was hurt by Aristoles's decision but nonetheless accepted, staiting that "Friendship can't beat Love". Despite his boundless allegiance to Sheila, Aristoles was deeply immersed in a crisis of loyalty due to the Prime Minister of Helman, Stessel Romanov, who he was aware was using Sheila as a puppet ruler to rule the country, progressively taking it to an utter state of corruption. He knew about Stessel's true intentions and schemes, and held a deep hatred towards him as he was responsible for his friend Patton's supposed death in the 7th Helman-Leazas War. He's been trying to expose him since then, carrying a secret investigation of his own to reveal his nature and have him executed, but his undying love for Sheila makes him surprisingly easy to manipulate, and his own Lieutenant Convert Tax makes sure to keep him in check. He's usually an extremely capable man that acts rationally and doesn't let his emotions control him, but when Empress Sheila is involved he loses sight of everything around him.

An unbelievable talent Aristoles was deemed a genius since a young age, and for good reasons. He is considered to be a genius soldier due to his skills as both a warrior and as a tactician, with his archery considered to be the best in The Continent. He's an extraordinarily clever individual, capable of making very accurate predictions and plan ahead. He's very precise and resourceful, with a Leadership Lv2 skill that allows him to make the best of his unit. His leading prowess is so great that he was placed in charge of commanding the largest Unit of the Helman Army, safeguarding the gigantic Fort Banra that spreads throughout the country to protect the country from the Monster Realm. A true master of the Art of War, Aristoles represented an invaluable ally and a fearsome foe. Few would dare to go against him in a battle of wits, and his collected demeanor allows him to remain effective regardless of the situation. He's cold and serious, spending every second making calculations and preparing his next move.

He's also an impeccable and terryfingly precise archer, wielding a crossbow in battle with an incomparable might. With extensive knowledge of maths and physics, his shots are excelent and prove deadly in the battlefield, to the point he's gotten fame as a long-ranged sniper and assassin. This is furtherly proven by being one of the only two living beings with a Bow Combat Lv2 skill, making him an outstanding talent in the field.

In direct battle, he also has skills at swordsmanship, boasting a Sword Combat Lv1 skill and training he received since a young age to become a foremost knight, with a Level Cap of 52 and his current Level being as high as 45. While he couldn't even compare to truly remarkable fighters like Minerva Margaret or Rolex Gadras, he was a powerful warrior that should not be taken lightly in a duel despite being more specialised in tactical maneuver. He also had an unprecented Gardening Lv1 skill, which he regularly made use of in his free time as it was one of his major hobbies.

All these skills made of Aristoles an almost perfect Commander, even more so considering his still relatively young age. His departure during the Helman Revolution is considered one of the biggest losses of the event. 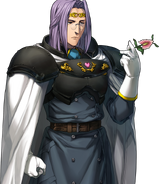 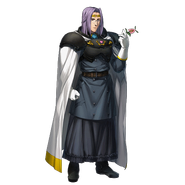