Arima is a father of the Catholic Church. He was recently transferred to the town above the Lid of the Kettle of Hell in 1994, with his foster daughter Katsuragi Karin.

He is quite easy-going, calm and caring. He seems to be quite a skilled homemaker as he seems adept at most household tasks, gardening and is even good at knitting. He is also a decent hacker, a hobby he got introduced to by watching the movie WarGames.
When angered he turns quite sadistic, preferring to make someone suffer as long as possible instead of outright killing them.

As a young man he always had quite an interest for magic, this was his main reason for actually becoming a catholic priest. He just wanted to read the books on magic that the vatican should possess.

As he worked his way up the ranks he became an exorcist which gave him a lot of leeway and what he was allowed to do. His vices were mainly drink and women. This is how he met the demon Astaroth, who at the time possessed a young girl. Instead of just exorcising her, he instead had what can only be described as a sex battle. This interested her greatly and she became his familiar, ultimately coming to love him.

During the events of the game him and Astaroth help Shura out in various way. He becomes Ky when Shou sacrifices herself for Shura. He saves Shura by draining Badb's power with Shou's help.
Afterwards he tries to adopt Yura so she doesn't have to live alone.

He appears as a joke route in Mugen Houyou. He bemoans that he doesn't get a CG and how it was unfair that Astaroth did appear in a Megastore supplemental disk.

You assume the role of Arima as he goes through the mansion looking for a mysterious flower. The various women found in the mansion are possessed by a variety of youkai and he frees them if you go into their rooms. He beats the invisible (read CG-less) demon lord and takes the flower without ever telling Opium what he plans to use it for

To fight he uses rings with various demons in it, the ones he had with him were: Glasya-Labolas, Barbatos and Halphas. They are interpreted as a cute beagle, four dwarves and a crow respectively.

He also has a small personal appearance in Ikenai Katsumi Sensei where he is working a part-time job as a clerk at a rundown movie theater. There is also an antique store owner who is quite similar, even carrying a pink haired grandchild as Arima would with Astaroth. 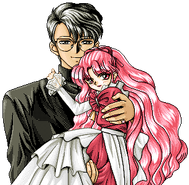 Him and Astaroth in AmbivalenZ

Him in Ikenai Katsumi Sensei