Anise Sawatari is officially the assistant and apprentice of the head of the Four Lords of Zeth, Chizuko Yamada, but in reality she's a girl with a ridiculously amazing magic power that vastly surpasses that of any mage in the magic kingdom. However, she's also dense and incompetent to the point where she is much more of a danger to her teammates than she is to her enemies, earning the nickname of the legendary "Ally-Killer Anise". Because of her clumsy nature, Chizuko is constantly keeping her under control as a mentor figure.

She made her first canonical appearance during the events of Rance VI after the Green Corps of Ice Flame led by Rance successfully kidnapped Emi Alphorne in an attempt to use her as a bait to obtain information about the Mana Batteries from her father Radon Alphorne. After a meeting was held to negotiate, Radon appeared alongside Anise hoping that she would be able to defeat Rance's group and rescue his daughter. The original plan was to trap Rance's group in the Dimensional Labyrinth before leaving with Emi, however this was quickly ruined by Anise herself when her spell instead trapped everyone, including Emi, Radon and herself. Once inside with everyone separated from each other she began blowing up the walls of her own labyrinth in an effort to find Rance's party. Unfortunately for her, after blowing away a wall the destruction caused accidentally hit Radon's daughter Emi, resulting in her being severely wounded. Fearing reprimanding, she quickly ran away from the scene, allowing the Green Corps to obtain the information from Radon in exchange of Emi's safety. Soon after during the operation carried by the allied forces of Ice Flame and Pentagon, she tried to defend Chizuko's tower from a group led by Abert Safety to destroy the Mana Battery on the tower. In this incident she carelessly launched an attack that killed almost every member of the group, with the exception of Abert, but destroyed the very same Mana Battery she was supposed to protect as well.

When the Collapse of Zeth takes place after the invasion of the forces of the Monster Realm with a Demon Army led by Camilla, Anise appears again as one of the many escapees in the Zeth Escape Force where she initially didn't contribute much but was kept close to Chizuko. However during the Final Operation to reactivate the Maginot Line in order to defeat the Monster Army she represented a vital element for the plan, as she and King Gandhi alone would infiltrate in the basements of the Defensive System in order to use her amazing magical power to recharge the Mana Battery, allowing Rance's group to reactivate the system. The operation was a complete success and her contribution allowed Zeth to finally defeat the invading forces of the Monster Realm and end with the catastrophe, saving the Kingdom as a result.

Following the defeat of Camilla and the Demon Army, Anise was tricked by the very cunning Abert Safety, who acknowledged her immense power and potential, and became his subordinate, serving him as a Lesser Apostle. During the final battle between Rance's party and Abert she fought alongside him, representing a fearsome foe. After Abert's defeat, she returned to her former job as Chizuko's close apprentice where she still remains at present.

In Rance X, she is taken over by RedEye and is saved by Rance and co. She later help with the war effort.

In the non-canon Kichikuou Rance Anise first appears during the Zeth phase when war breaks out between the Magic Kingdom and the new Leazas led by the recently crowned King Rance. She's sent to fight once when she pesters Chizuko enough to send her out to fight. However, Chizuko only allows her unit to sortie without any backup troops (to prevent Anise from killing allies), allowing the Leazas Army to easily defeat her. Despite her defeat she insisted in getting deployed a second time and Chizuko agreed to do so only if she manages to answer a simple question correctly, which she failed to do, and resulted in Chizuko sending a generic Mage commander instead. If Shizuka is used to make the Flash Anise may be recruited in the harem if Chizuko is saved and recruited as well, but if Shizuka is saved, Anise is used instead, resulting in her death.

Anise is a young girl with crimson eyes and a long light blue hair tied with a golden headpiece, as well as wearing what appears to be a metallic headband. She wears a specially designed set of magic robes of a purplish color combined with white pants and sandals. She's always carrying a gren staff with a red pearl on the end, which she employs to channel her magic.

She's a very notable figure on the Kingdom of Zeth due to her unbelievable magical power, but she's also widely infamous for her profound stupidity and clumsiness. She's incredibly dense and simple minded, using her extraordinary magic without thinking things through and often causing chaos and disaster. She's impulsive and doesn't know how to hold back, resulting in her causing a lot of trouble to others. She's an optimistic and quite energetic girl that many struggle to keep under control, as she often recklessly acts based on her own judgment. Wherever she goes, havoc will go. She's a guaranteed source of accidents and doesn't notice how dangerous her courses of action are unless she's told beforehand, though more often than not she will underestimate the potential danger. She's quite proud of her talent as a mage and enthusiastically tries to make use of it whenever possible, often trying to optimistically use her magic to fix a situation but making a much bigger mess. She's depressed when she fails but that won't stop her from trying again the next time. She faces a hard time learning from her own mistakes, either repeating them thinking that she won't fail again and sometimes downright ignoring them due to failing to see the potential consequences.

Her stupidity is unbelievable and she's capable of the most irrational and incomprehensible actions, being a very unpredictable person that few would wish to have around. When told to throw away the m Bomb, a magical item created by Papaya Server capable of killing every human being within a 2 km range, she kept the bomb because she thought it'd be a waste and even got attached to it and carried it around as an amulet thinking that its design was "cute". Despite her borderline insane stupidity, she tends to maintain a respectful and somewhat formal manner of speaking, though she's also quite awkward and always says everything she thinks with no filter. While many people call her "the clumsy witch" when meeting her, she's not very fond of this title, defining it as "rude".

Despite her amazing power, no-one wishes to keep her under their care due to her lack of common sense. The only one that can keep her under control is her mentor Chizuko Yamada. She holds her in a higher regard than anyone else and is very attached to her master, showing great concern for her. She often tries to be of use to Chizuko but her efforts always end up backfiring and causing her even more stress. She studies as her personal apprentice, but also tries her best to assist her even if it's just for mundane tasks like taking her tea or cleaning her office (tasks that she's also largely ineffective in). The only other person that seems to have some level of control over her is King Gandhi, whose permissive and optimistic personality meshes surprisingly well with hers as he's not as troubled by her foolishness nearly as much as others are.

Her own intelligence quotient aside, Anise is an extraordinarily powerful mage capable of going beyond even the wildest expectations of those that have heard of her power. She's been called the most powerful spellcaster in the world on multiple occasions and her power is so absurd that she's capable of surpassing even the most powerful and experienced mages on Zeth like Kabachahn the Lightning and King Gandhi despite being way more inexperienced and untrained than them. She possesses a Magic skill level of 3, a legendary class magician only seen a handful few times in history, as well as boasting a ludicrous Level Cap of 88, with her current Level being as high as 56. In brute spellpower, her magic is above any other living being in the Human Realm and even the most basic spells can be lethal when casted by her. She also has an abnormally high capacity for mana, further boosting her raw power. During the repairing of Maginot Line, massive amount of magic energy were needed to reboot the Mana Battery. Normally it takes 2000 mages to supply this amount, but King Gandhi and Anise were able to supply the required amount between just the two of them, indicating the amazing amount of magic power she has.

She's capable of casting the very high level spell the White Destruction Beam effortlessly and in a quick succession without showing any exhaustion or loss of stamina, as well as casting the more powerful Black Destruction Bleam to an even more powerful level than the regular attack, capable of eradicating all enemies in sight. She's also capable of creating an alter-dimensional space with little effort, something that usually requires a vast knowledge on the magical arts, as well as a considerable amount of power comparable at least to Apostles. She's also capable of single-handedly containing the grimoire of Nomicon, a cursed spell-book that even the considerably talented and powerful mage Papaya Server could never control. Furthermore, Anise's own power is so big that she herself can't control it, and she wears a special set of robes specially crafted to limit and restrain her own magical power, indicating just how potentially powerful she could become, comparable probably only by the might of M.M Rune.

Despite all these outstanding abilities, Anise is incredibly incompetent and dangerous as an ally. On the battlefield, she tends to kill everyone around her (allies and enemies), as well as bringing a considerably high amount of collateral damage to the point that she's seen almost as a natural disaster. Her clumsiness and all-around stupidly only makes her more dangerous and fearsome for her companions. She's also largely incompetent and is incapable of carrying the tasks she's ordered to unless she's carefully supervised. She tends to downright forget about her mission when it's something other than destroy the enemy, and it's downright impossible for her to serve as a bodyguard of a person or an area. It's for these reasons that she's never sent to the battlefield, not even in the most desperate situations as she's, for good reasons, considered mostly useless and she's mostly just doing simple house-work hoping she doesn't mess that up too. 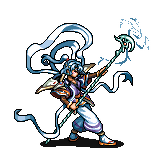 Anise in the Harem section in Kichikuou Rance.

A sketch of Anise from the Rance Quest Booklet.