AliceSoftWiki
Register
Don't have an account?
Sign In
Advertisement
in: Articles with Minor Spoilers, Articles needing a Quote, Level Cap Reached,
and 6 more

Amitos was a commander of the Helman 3rd Army under the command of Minerva Margaret. She's righteous and with a strong sense of honour and duty, which is why her personality doesn't mesh well with the one of her boss Minerva, who she considers a selfish and cowardly warrior.

She made first appearance in Rance Quest as one of the Helman soldiers sent to an operation in Pencilcow under orders of Minerva. She expressed her disagreement to the mission, labeling it as a suicide mission, but Minerva cared little about her objections.

True to her concerns, most of the Helman soldiers were killed by the curse spread by Pastel Kalar after obtaining a high number of Kalar Crystals, but Amitos was the only survivor due to her status as a woman. Minerva only sent the platoon to get the Kalar crystals and was aware that they would all die in the process, but she didn't care as long as they succeded in the harvest.

In Rance IX, she re-appears as a member of the 3rd Army but she confronted Minerva again when she resorted to a cunning and twisted plan to burn an innocent Helman Village to gain an advantage against the Revolutionary Army. Thinking that Minerva crossed the line, she engaged on her enraged, but this backfired to her when Bashou of the Council of Eight declared her a traitor for doing so. As punishment, she was tied with chains to a metal crucifix, where she was heavily tortured and used as a sexual outlet for soldiers.

She was later released by the Revolutionary Army, deciding to join them in the revolution to reform Helman to its former glory. After the revolution ended, she was appointed the General of 1st Army in place of the deceased Lelyukov Berkov.

In appearance, Amitos is a very corpulent and sturdy woman, like that of a typical Helman soldier. She's tall, strong and fit, boasting a long blonde hair and a sturdy armor similar to the one foot soldiers wear.

Amitos is a very serious and tough woman, with a very deep sense of justice and righteousness. She's extremely serious in her duties and has a powerful sense of honour, responsibility and unquestionable loyalty. She shows little fear or hesitation, and is extremely loyal to her country, taking her responsibilities as a Knight very seriously. It's for this reasons that she is one of the few people in the 3rd Army that confronts Minerva and opposes her decisions. Despite being a boss and subordinate relationship, it is also a very conflictive one due to their opposing personalities. Amitos openly states that her loyalty goes to her country and not to Minerva.

Amitos is a powerful and remarkable knight, with an impressive stamina and strength. On battle, she has a firm and unshakable stance, wielding a heavy sword and a shield tied to her left arm.

She has Sword Combat and Guard Lv1 skills and is a very durable opponent that can fight for long periods of time and outwit her opponents. She has an imposing battling spirit, and her force of will and mental fortitude are absolutely impressive. She's also smart and rational, taking very reasonable choices in and out of the battlefield. Despite her deep sense of honour and pride, she also knows when to retire for the sake of a future victory for her country. She's a noble knight that would never play dirty and fights with respect for all her opponents.

Her Level Cap is 38, and through lots of constant training she reached it and maintained it at that since then, never dropping a single level. However, despite all these traits, she's not nearly as impressive as the most powerful fighters Helman has offered like Minerva Margaret or Thoma Lipton, representing a powerful force solely for her raw spirit. After the revolution her skills were enough for her to succeed Lelyukov Berkov, one of Helman's greatest war heroes of the era. 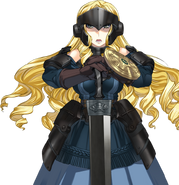 Concept artwork of Amitos from the Rance Quest guide book. 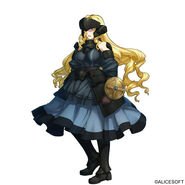