AliceSoftWiki
Register
Don't have an account?
Sign In
Advertisement
in: Articles with Major Spoilers, Articles needing a Quote, Level Cap Reached,
and 7 more

Am Isuel used to be the Pope of the AL Church but she rebelled against the Gods and abandoned her position. She took the position of the pope in the year GI0979 and was the first female pope, but she disappeared soon after.

Before becoming the pope she was a firm believer of the AL Church's doctrine, but upon becoming the pope and meeting Goddess ALICE she found out the truth of the world, which she resisted and chose to abandon. However, she was overwhelmed by the God's power and was aware that humans can't stand against them with raw strength.

She found a way to challenge the Gods. "Souls that are 100% contaminated can't return to the Creator God". Souls are contaminated by negative emotions like self-doubt, fear, anger, pain and others, human typically commit suicide upon reaching 80% of pollution. Onis are incapable of purifying souls that had reached the limit and those souls have to be thrown away. She founded the organization called Shepherds, dedicated to pollute the souls of allhumans around the world by manipulating behind the scenes, or sometimes directly. Her soul is completely polluted, usually when this happens humans are completely lost to insanity, but she managed to remain a very smart and sensible person.

Am's goal is to escape the Reincarnation Cycle the Creator God has cruelly placed onto humanity by stopping the flow of Souls in the Cycle of life. Unfortunately, this requires her to lead humans to a critical point of despair in order to reach 100% pollution.

Despite her young looks, Am disappeared 41 years ago when she took the role of the pope so she's presumed to be at least 60 years old. She boasts a beautiful silver hair and wears a black gothic dress with something that resembles a crown of black leaves.

Am is an extremely intelligent human and has sufficient mental fortitude and self-control to remain a rational and intelligent person despite having a soul 100% polluted. She wants to lead as many humans as she can to this path to escape the Reincarnation Cycle of Ludo-Rathowm. Am's exceptionally capable when it comes to controlling and manipulating the masses. She's a smooth talker and a very rational person.

She has many loyal followers that are completely devoted and servile to her, willing to do anything or go anywhere they are ordered to.

Am's power as a human is immense. She has a level cap of 80 and actually reached her cap, being the human with the highest level in the world and one of the most powerful in history. She has a Lv2 skill in Divine Magic. While the use of Divine Magic is typically for healing and purification, Am uses it in combat primarly for offensive purposes. She has a very powerful unique skill called "Divine Breaker Wave", an immense and fearsome spell that obliterates all enemies in a huge area.

While her power as a mage and in combat is certainly impressive, her greatest talent is her ability to manipulate people. She has a Conversation Lv3, making her one of the few Lv3 users in history, and it is said that this skill is what makes her fearsome enough that the Gods were scared of her becoming an absurdly dangerous Balance Breaker. She has a sufficient organizational control to manipulate people to betray governments, give a false feeling of crisis or trick and persuade people with ease. She can convince and induce humans to consider suicide and even brainwashing with just her narrative skills. Be it persuading, tricking, negotiating, manipulating, and more, Am's exceptionally skilled with these tools to pull the strings from the shadows the way she wants. It's this skill what allowed her to get so far against the Gods. Considering the size of her organization, her charisma and her goals, Am represents an imposing threat. 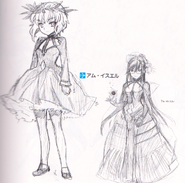