Alkanese Rize was the boss of a Helman bandit group "Lion Mind". This bandit group consists only of girls who have been betrayed by men and their aim is to eradicate them.

The group mostly composed of unattractive women that were mistreated. Alkanese herself is actually a beautiful woman but she has a complex about her being unfeminine due to her corpulent and tall body.

The group has been causing quite some trouble in Helman, that is, until Rance hears about them during the events of Rance Quest and defeats the group. She later ended up joining the Rance Castle and even admiring Rance.

In Rance IX she joins Rance and the Revolutionary Army along with Crook Mofus.

Alkanese is a young woman with a tall and robust body. She has a long blonde hair that flows in a loose and messy manner, that reminds one to the mane of a lion. Her breast size is also noticeable bigger than the average female.

Personality-wise, Alkanese is not like one would think. Despite her appearance suggestive of a self-assured and straightforward person, she's actually pretty insecure with herself and has a complex for being unfeminine, which is justified since she's actually a bit tomboyish at times but mostly with those she grew fond of and feels confident with. However, she's also surprisingly shy and submissive when embraced or makes direct contact with others.

Her relationship with Rance is almost like that of an elder brother for her. She respects him a lot and looks up to him. She even calls him Aniki, which even means "big brother" in Japanese.

Alkanese is a pretty strong sword fighter that can use heavy and wide weapons. She wields it like an Axe rather than a sword, which is logical due to her Hammer Combat Lv1 skill.

Her cap is in fact really impressive, clocking at 60, with her current level being 38. She's naturally strong and durable, with a very high endurance, she would probably make a good footsoldier. She has an ability called Berserk that grants her a great strength boost in exchange of reducing her defenses immensely. This is an ability that any warrior can learn but is naturally inherent in Alkanese. 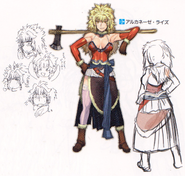 Concept artwork of Alkanese from the Rance Quest guide book.