Alice Tenmabachi is a very popular idol from the city of The-O from the Free Cities Alliance. She's a beautiful young woman with a cheerful attitude, skilled at singing and dancing. Her popularity is so big that it only it stretches through the free cities, but she's also well known in Leazas. Merchandising of her is very prominent, and posters promoting her are a common occurrence as well.

Rance seems to like her, since he has an Alice wallpaper in his house, and the General of the Black Army of Leazas, Barres Province, also claimed to be an Alice fan as well.

During the Helman occupation of the city of The-O in the events of Rance 03, the third army was set in the city, and Alice's employer offered her body to the general of the third army, Thoma Lipton. The general however rejected the proposal completely.

In the epilogue, Alice is seen singing to a crowd and gets a fan letter from Kapala Lodz. 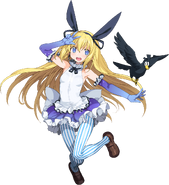