Alice-chan is the official mascot of AliceSoft, with her design being visibly inspired by Alice from the famous Alice in Wonderland book series. She appears in the menu screen of most AliceSoft games welcoming the player, sometimes in her own "Alice's Cottage" (アリスの館, Arisu no yakata) section, and is often used as the medium for Alicesoft to talk directly to the player. As such, she can sometimes talk about the game, the team that worked on it and discuss the different bonuses available in the menu. She can sometimes make cameo appearances in the game itself, and can serve as a narrator to some of the events, such as in the chapter transitions of Rance 02 and Rance IV where she can reproach the protagonist for his brutishness and behavior towards Sill. Her companion is a black crow named Yukichi. She displays a cheerful disposition in her appearances, severely contrasting with her friend Dark Alice who has a more morbid bent.

Alice-chan is often seen with long blonde hair and blue eyes. She wears a blue dress with an apron and also has a headband.

Alice-chan is very polite and refined. She often is very kind to the player, thanking them for playing and/or buying the game. While she is mostly a way for AliceSoft to speak to the player, she does still have her own personality.

Despite how she has very few lines in all her appearances, she appears in almost every AliceSoft game

Alice's Appearance in the original Rance I 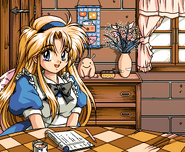 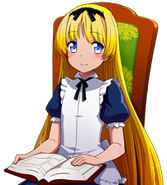 Alice's Appearance in Alice no Yakata

Alice's Appearance in Alice no Yakata 2

Alice's Appearance in Alice no Yakata 3 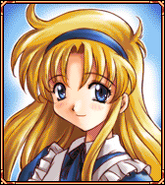 Alice-Chan in Ayumi no Monogatari

Alice's Appearances through the years in Rance games

Alice in a Yukata 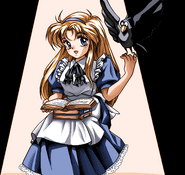 Alice in the Rance 4.x games

A Calendar with Alice on it

Alice in a Schoolgirl Uniform 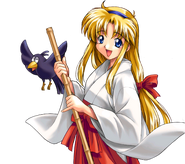 Alice on the cover of Alice no Yataka 7 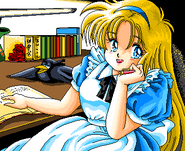 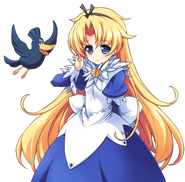 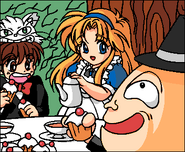 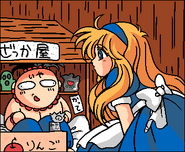 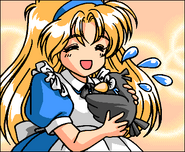 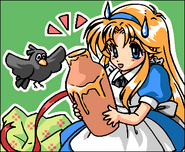 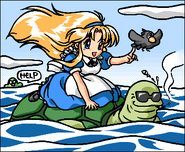 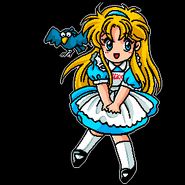 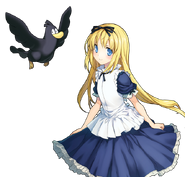 Unused portrait of Alice and Yukichi from Evenicle. 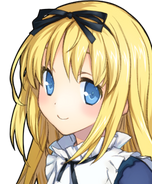 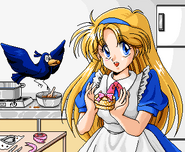 Schoolgirl Alice in Toushin Toshi
Add a photo to this gallery
Retrieved from "https://alicesoft.fandom.com/wiki/Alice-Chan?oldid=111907"
Community content is available under CC-BY-SA unless otherwise noted.