AliceSoftWiki
Register
Don't have an account?
Sign In
Advertisement
in: Articles with Major Spoilers, Characters, Male characters,
and 8 more

Alexander is an incredibly talented martial artist who is destined to become the champion of the Toushin Tournament.

Throughout his youth, Alexander wandered The Continent in pursuit of strong opponents to fight in order to hone his skills. He participated in several different fighting tournaments while doing extensive mercenary work on the side and gradually refined his technique over time.

During the events of Rance 01, Alexander appeared as a fighter in the Leazas Coliseum. Alexander managed to reach 7th place among the coliseum rankings before he faced off and lost against the adventurer Rance. While Rance noted that Alexander was stronger than he had expected him to be following his victory, he also claimed that the martial artist was ten years too early to stand a chance of winning against him, prompting Alexander to say that he would continue his training.

Alexander later appeared in Rance Quest, where he accepted a job offering posted by Rance at the McCart Bar in hopes that joining an adventuring party would assist him in his training, despite Rance emphasizing that he was only interested in female applicants. While Rance was initially dismissive of Alexander, he eventually caved in to his persistence and allowed him to travel with him. During this time, Alexander became enchanted by the beauty of Sill Plain, who was trapped in a block of unbreakable ice inside of Rance Castle, and developed a fetish for pink-haired girls, vowing to have a daughter of his own with pink hair. His desire for a pink-haired daughter was so great that he instantly proposed to Eropicha Nyanko after first laying eyes on her, though she immediately refused him. During this time, Alexander teamed up with the mercenary Bernard Seramite to defeat a group of criminals who had robbed the Zeth Royal Museum. While the two warriors initially clashed with each other, with Bernard believing Alexander to be too inexperienced, they eventually bonded over their mutual burning passions.

Sometime after the events of Rance Quest, Alexander found the pink-haired woman of his dreams and briefly settled down with her and had a daughter who he named Kumiko. He eventually went on to win the Toushin Tournament, but immediately disappeared from the public eye after his victory and was never seen again, with many assuming he simply wandered off in search of his next challenge. In reality, he had been kidnapped and brainwashed by YORA, the villainous mayor of Toushin City who had been draining the power of the partners of previous champions in order to make himself stronger. He was eventually rescued by his daughter and her boyfriend, a young warrior named Custom, and the three worked together to defeat YORA.

Following YORA's defeat, Alexander gave his blessing to Kumiko and Custom, allowing the two to get married, and assumed the role of mayor of Toushin City in YORA's place. As the new mayor of the city, Alexander continued to hold the Toushin Tournament in hopes of finding more strong opponents to fight against.

Alexander is a tall man with a muscular physique, dark red hair and large, prominent eyebrows. In his youth he wore a red sleeveless karate gi, while in his later years he wears red plate mail in addition to gaining a scar across his right eye. Throughout his appearances, he wears a distinct red cape.

Alexander is a straightforward and serious man who lives solely for battle. Though generally calm and controlled, he is prone to becoming extremely passionate when faced with something that interests him. After becoming fascinated with martial arts, Alexander dedicated himself wholeheartedly to developing and refining his fighting skills through whatever means were available to him. While this devotion allowed for Alexander to become a superb warrior, it also negatively impacted his social skills, causing him to act overly blunt and inadvertently rude towards others when interacting with them. Following his victory in the Toushin Tournament, Alexander became much more relaxed and jovial, and is more interested in finding a successor to his legacy than improving his own strength, though he remains eager to fight anyone who interests him.

When under the control of YORA, Alexander became a much crueler person, callously looking down on those he saw as weaker than himself and showing complete indifference to anything that did not involve fighting.

Alexander has a somewhat complicated relationship with his daughter Kumiko, who he left with his wife when she was very young in order to participate in the Toushin Tournament. While he had initially intended to return to them after the competition had ended, he was kidnapped and brainwashed immediately after winning, and was forced to remain in Toushin City for several years as a result, causing Kumiko to believe that he had abandoned his family. After being reunited with his daughter, Alexander proved to be a loving father who regretted being absent throughout most of her life and hoped to be able to make it up to her through whatever means he could, causing him to happily support her relationship with Custom after seeing how happy the two were together.

As the champion of the Toushin Tournament, which is fought only by the strongest fighters in the world, Alexander is one of the most powerful people currently alive. He possesses a staggering Level Cap of 77, one of the highest in existence, surpassing even the likes of Rick Addison and Uesugi Kenshin, and giving him immense potential. He is also regarded as one of the only individuals who can hold his own against Rance's Children, who all have infinite level caps and are regarded as some of the strongest adventurers in the world.

Alexander is a supremely talented martial artist who boasts a vast array of powerful techniques. He is the only character of the Brawler class in Rance Quest who is able to learn every single possible unarmed fighting technique available.

Alexander's strength only increased with age, as he was able to deal incredible amounts of damage to YORA during their final battle despite YORA having power rivaling a high level Dark Lord and Alexander having had a large amount of his strength already drained. Custom notes that simply being near him is enough to understand his terrifying strength and admits that he would stand no chance against him in a fight, despite having just won the Toushin Tournament himself, suggesting that his strength has vastly surpassed that of even the other champions of the tournament.

Concept artwork of Alexander from the Rance Quest guide book. 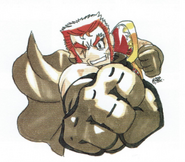 Alexander from the Alice's Cottage 4/5/6 Guide.