Akechi Mitsuhide is the chief tactician of Oda House.

A loyal vassal of the Oda Family, Mitsuhide remained a firm supporter of its lord Oda Nobunaga even after he had caused it to lose the vast majority of its territory due to his poor health. Despite this, however, Mitsuhide's desire to resolve all conflicts nonviolently often caused him to be at odds with his more aggressive colleagues, who considered him foolish for attempting to avoid all confrontation at any cost.

During the events of Sengoku Rance, Mitsuhide was one of the few Oda commanders to remain loyal to the country after Oda Nobunaga appointed the foreigner Rance as the secret head of the family. During the civil war that broke out within the nation by the commanders in opposition to Rance's leadership, Mitsuhide attempted to persuade Nobunaga into allowing him to negotiate with the defecting troops, but was largely dismissed and ignored by his companions. Though he plays no other role in the story beyond this, Rance is given the option of "Akechi Mitsuhide: Bully" when picking a satisfaction bonus, which, after being done twice, will cause Mitsuhide to resign from his position, forcing his daughter Gracia to take his place.

While little is known about what happened to Mitsuhide following the unification of JAPAN, as he is still officially recognized as the Oda family's tactician, it is likely that either Rance never ended up removing him from Oda's forces or that he simply returned to his position as tactician after Rance had left the country.

Mitsuhide is a fairly plain-looking man in his mid-thirties with straight black hair in a topknot style that is parted down the middle. His clothing consists of what appears to be a simple purple kimono with some light armor covering it for protection.

A timid and passive man, Mitsuhide stands out when compared to the boisterous commanders of Oda. He abhors violence, and tries as hard as possible to avoid any sort of confrontation with enemy nations. Because of this, he held no desire to attempt to unify JAPAN through conquest, and urged his lord to maintain a low profile after their nation had lost most of its territory and power.

Despite his high position within the Oda Family, Mitsuhide holds very little actual power due to his meekness. He is looked down upon by his colleagues, with even the normally jovial and goodhearted Shibata Katsuie expressing annoyance with his attitude, to the point of calling him a coward. This was only furthered during Rance's time as the secret ruler of Oda, where he more or less completely ignored Mitsuhide's existence, giving him no opportunities to even attempt to fulfill his role as a strategist. Likely as a result of this poor treatment, Mitsuhide seems to possess low self-esteem, and dejectedly states "I thought so..." when fired as a commander.

A man of somewhat notable ability, Mitsuhide possesses a surprisingly above average Level Cap of 32, giving him a moderately high amount of potential. He is not a fighter by any means, however, and is individually frail and underwhelming when compared to others of similar ability. Beyond this, Mitsuhide has a substantial amount of talent as a tactician, allowing him to adeptly formulate complex strategies to gain an edge over his enemies, though his natural cowardice causes him to panic and hesitate when under pressure, compromising his ability as a strategist in the process.

Mitsuhide's greatest talent is his skill at negotiation. His reluctance to fight others has allowed him to develop his own natural affinity towards diplomacy to impressive levels, allowing him to adeptly organize meetings with his enemies in order to resolve conflicts nonviolently. It is likely through Mitsuhide's ability to reason with potential enemies that Oda House was able to continue function fairly discreetly even after losing nearly all of its territory. 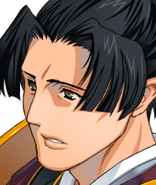 Concept artwork of Mitsuhide from the Sengoku Rance manual.