Akashi Kazemaru is the youngest son of the Akashi family, and the reluctant head of Akashi House.

As the youngest son, Kazemaru was raised under the belief that he would never become the ruler of Akashi, and would instead serve under his father and older brothers as an advisor. Unfortunately, following relentless attacks from Mouri House, Kazemaru's father, all three of his older brothers, and the majority of Akashi's generals were killed, forcing Kazemaru to assume the position of lord to the weakening nation. While he was resistant to take on the responsibilities of being a leader, Kazemaru dutifully continued to defend Akashi's remaining territory out of respect for his family.

When Akashi was attacked by the forces of Oda House, it quickly began to fall due to a severe lack of manpower. Just as Kazemaru was about to resign himself to allow his nation to be destroyed, he was given a letter from his father by one of his remaining generals informing him of what to do should Akashi be close to defeat. Following the instructions of the letter, Kazemaru discovered a secret laboratory in a nearby forest containing four powerful Nuhe, which he unsealed per the letter's orders. While he was reluctant to use them as weapons due to their strong resemblance to humans, Kazemaru followed his father's wishes and allowed the Nuhe to participate in battle.

The Nuhe proved to be extremely effective, with each one being able to individually hold off the Oda forces single-handedly through their powerful self-destruct technique. Despite this, Kazemaru remained unhappy, believing it to be cruel to allow the Nuhe to live only to immediately force them to die for him in battle. Following the death of the third Nuhe, Yuuge, who he attempted to bond with prior to her being sent to battle, confirming his belief that they were capable of learning and developing emotions just as humans are, Kazemaru refused to send the final Nuhe Hibachi to battle. After unsealing her, Kazemaru gave Hibachi the order to "live" and told her to stay as far away as possible from the battlefield.

Following the defeat of Akashi House, Rance has the options of recruiting Kazemaru, forcing him to commit suicide, or making him wear a false mustache as a joke. If recruited, Kazemaru will make a request to organize a search for Hibachi, which Rance immediately agrees to after learning that she is a beautiful woman. Once reunited with Hibachi, Kazemaru vows to protect her for the rest of his life and the two begin living together happily.

Following the unification of JAPAN and the defeat of the Dark Lord Xavier, Kazemaru continues to loyally serve under Kouhime as one of Oda's commanders, with Hibachi always by his side.

Kazemaru is a young man in early adolescence. As he is not yet fully grown, he is quite small and slender, and possesses soft, boyish features and distinct blue hair that is swept over one eye at all times. He wears standard black and gold Akashi family armor with a pair of grave posts strapped to the back as a sign of remembrance to his departed family. His face is almost always in a timid, unsure expression, reflecting his general state of being.

Due to the countless hardships he was forced to face in quick succession, Kazemaru is a quiet, withdrawn and timid person. He speaks with no confidence in his voice and tends to trail off mid-sentence during conversation. The deaths of his family members weigh heavily on him, as he holds himself responsible for them, and he frequently cries when thinking about them. He is described by Rance as being "depressing to be around" due to the lingering sense of hopelessness he carries with him at all times.

Contrary to his frail and emotional personality, however, Kazemaru possesses a surprisingly firm inner strength, and shows astounding determination to accomplish his goals when in the face of conflict. He dutifully defended the Akashi House against impossible odds in order to honor the sacrifices of his father and brothers, and refused to surrender even when urged to by his advisors. After resolving to prevent any more people from dying for his sake, he freed Hibachi without hesitation, despite knowing that it could doom both himself and his people in the process. Following the defeat of Akashi House, he persistently asks Rance to order his troops to search for Hibachi, and refuses to give her to him once they are reunited, showing a surprising amount of courage when dealing with the volatile warrior.

Kazemaru maintains a strong love for Hibachi, who he has vowed to protect for as long as he lives. His decision to protect her is born from his frustrations with having his family, the Nuhe and all of the people of Akashi giving their lives to protect his own. While Hibachi is instinctually driven to follow his every command, Kazemaru continually encourages her to make decisions for herself, and his greatest wish is for her to have her own free will.

Kazemaru has a close friendship with Kouhime, who is the same age as him and has gone through a similar amount of emotional turmoil in a short amount of time. While Akashi House was still active, he was pressured by his subordinates into marrying her in order to strengthen their national power, but he turned them down due to his belief that making Akashi House subordinate to Oda would dishonor his family's sacrifices. After becoming a commander for Oda's forces the two began spending a large amount of time together, which caused Hibachi to become jealous of Kou before Kazemaru told her that he only viewed Kou as a friend.

As Kazemaru is still young, he is untrained and has a long way to go before reaching his full potential. Despite this, his high Level Cap of 40 means that he has the potential to become quite strong, which, when combined with his great determination to improve himself, makes him a promising warrior.

In battle, Kazemaru wields a katana and fights as a conventional warrior. While he has no notable talent with the weapon, he trains with it every day and has achieved a proficient level of skill with it, which is quite impressive at his age. He also possesses a Skill Level in Medical Treatment, meaning that he could become highly skilled at treating injuries, a vital skill on the battlefield, though he does not appear to have spent any time meaningfully raising this talent.

Due to his inexperience, Kazemaru lacks skill as a military commander, which caused a large amount of problems for him and his subordinates when he was forced to take control of Akashi House. Nonetheless, his youth allows him to develop his talents in it more quickly than his older companions. After vowing to protect Hibachi, his abilities as a field commander noticeably improve, making him much more effective in combat. 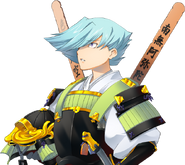