AliceSoftWiki
Register
Don't have an account?
Sign In
Advertisement
in: Articles with Minor Spoilers, Articles needing a Quote, Characters,
and 6 more

Agireda is a powerful commander of the Shimazu House, and like most of the female leaders of the House, was seduced by the brothers. However despite her attraction to them, she also despises them for what they've done to her.

Agireda used to be the daughter of the Chieftain of the Amazon tribe when Shimazu and the rest of Africa were at war, however she was approached and seduced by Shimazu Toshihisa and started accidentally divulging some of her tribe's secrets. When she tried to seek retribution, she was successively seduced by the other brothers, and her tribe was soon destroyed.

Though she was manipulated into fighting for the brothers after their conquest and was still attracted to them, she never let go of her rage and was secretly hoping to have an opportunity for revenge. When the Demon Army took over Shimazu, she was sent after the brothers to attack Oda, but was eventually captured by Rance. When Rance came to her prison, she gladly joined the Oda forces in order to have her revenge.

Though Rance tries to sleep with her, she steadfastly refuses, right up until she gets an idea: she accepts sleeping with him, if Rance punishes the Shimazu brothers, a proposal he gladly accepts. As the brothers start falling one by one under Oda forces, Rance gets his prize and violently H's Agireda, however she ends up quite disappointed as she didn't enjoy it nearly as much as she did with the brothers she hated.

The dejected Rance tries to prove his superiority any way he can, and Agireda eventually did another proposition: she would only fall for him if he gave her a proof of his love, such as granting her the largest army in Oda, in order to regain her nation's glory, a term which Rance gladly accepted.

Agireda is a tall striking woman with a thin waist, blue eyes and dark skin, a skin tone rarely seen in the Continent outside of Africa.

Agireda is a conflicted individual: though she is extremely attracted to and easily seduced by the Shimazu brothers, she also passionately hates them. As such she will take any opportunity to have her revenge on them, but always falls to their wiles when faced with them.

She is a proud warrior and experienced commander with aggressive strategies, and as the former princess of the Amazon, one of her greatest goals is to restore the Amazon and its people to their former glory.

In the Ran Route, she becomes the leader of the Shimazu House following the four brothers defection, but is conquered by them once more following her defeat.

Agireda is a fairly powerful warrior, with a current lvl of 30 and a decent cap of 37. Like most JAPAN warriors, she specialises in combat with a spear, with a skill LV 1 in the style. However her true talent is as a war leader, as she managed to somewhat rally her broken nation and is a powerful commander.

Still, to her frustration, her battle and commanding skills are not at the level of the Shimazu brothers, and any direct attempt she made on their lives has ended in failure. 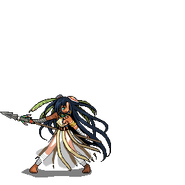 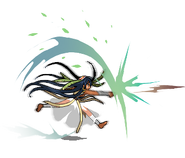