Aegis is the commander of Kalar tribe's defense team and the Queen's right hand.

She's been around since the time of the former Queen Modern, and was appointed as the commander of the Guards by Pastel, who has a lot of faith in Aegis' skills.

Although she was born as the second daughter of a group of three sisters, her younger sister was kidnapped by human beings. She attempted to rescue her along with her elder sister but by the time she managed to get to her, she'd already been raped and her crystal removed from her head. Her elder sister was also caught and killed, but she somehow managed to escape. This event led Aegis to want to protect the Kalar Tribe from human men, joining to the Kalar Guard squad.

Aegis is a very beautiful woman, with a long blue hair, typical of the Kalar race, and a very adult body, but she always keeps a very serious expression. She's usually very calmed and quiet, but will quickly jump to the action if one of her tribe is at risk. She had a red crystal and it turned blue when Rance took her virginity during the events of Rance Quest.

She's a very diligent watch captain that abhors dishonesty and unloyalty, being very devoted to her tribe. She hates lies more than anything, stating that those that utter untruths will get their tongues ripped out. She's notorious for her patience, serenity and dignity, very rarely losing her cool. She also has a very powerful mental fortitude and tenacity, being able to withstand terrible punishment or being gang-raped by many males without even letting out a sound and maintaining an unshakable resolution. Aegis is also known for being very noble and caring with her subordinates, being willing to surrender and give herself to humans in order to save one of her own.

She hates humans, especially males, but doesn't immediately attack them unless they show signs of hostility. She also has a deep sense of honor and gratitude, feeling great gratitude to those that helped her in the past and will always attempt to repay that debt if she can, although she still prioritizes her duties as the Captain of the Kalar Guard above her personal thankfulness for an individual.

She has admitted that due to spending most of her time around Kalars, she is largely unaware of what humans considers beautiful.

She made first appearance in Rance Quest as a Kalar that had been captured by the Amazusa group to harvest her crystal. Rance was the one that took her virginity but later saved her when she was about to be killed for her crystal.

She helped Pastel to attack Rance and pinned Rance and Suzume while Pastel cursed Rance with the Morurun curse.

However, when later Rance again tried to find the entrance to the Kalar village and captured her, she ate a special type of grass to lose 5 years' worth of memories so that she would not leak the secrets about Kalar village's whereabouts to Rance. When she woke up, Rance and Suzume told her that she and Rance had been lovers, as a result of which she was cursed by Pastel to lose the memories and be exiled out of the Kalar village. Still doubtful and confused but without much of a choice, she then joined Rance's party. She tried to probe Rance about the veracity of the story, but seeing Rance's signature candid eyes, she wasn't able to conclude that Rance lied to her.

Ironically enough, some of the lies Rance told her would end up coming true.

Aegis is a powerful fighter, very proficient with the use of a bow. She carries a Bow Combat Lv1 skill and a level cap of 50, with her current level being 40.

She's a very capable archer, with great accuracy and a very solid stance. Rance has noted her lack of openings and how firm her position is while aiming, holding absolute focus of her target without batting an eye. She also has some proficiency in magic, albeit she doesn't have a skill level for it, and usually uses it to empower the strength of her shots by imbuing them with magic.

She's incredibly skilled as an archer, to the point her ability scares most humans that enter the forest and most don't even want to consider facing her in battle. 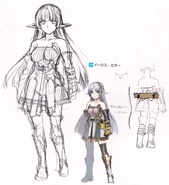