Oily Girl Dousan might be a minor character in Sengoku Rance without many appearances or even unique affection events, but she is well loved for the ability to recruit her early in a run through, and her extraordinary skills in battle, most notably her proficiency in Action Transfer, which allows her to replenish allies both in troop and solo battles, unlike many other monks, who only have the skill available in solo battle.

Based on an April Fool's joke (see trivia), she naturally has a humorous and bubbly personality. In battle, she will shout lines like "Maximum slippery!" or "I think I can submerge myself in this!".

Oily Girl, despite appearing to be a cute girl, is actually a youkai and the daughter of the 'oil presser' or Abura-sumashi, a youkai in Japanese folklore who would steel oil from travellers. You might also notice her unique battle text where she hesitantly stutters when deployed in battle against Masamune in battle, or her line "I-I live freely!", when battling Omachi, a reference to the Great Youkai War.

The line she shouts in the MangaGamer version of Sengoku Rance "I'm the oil-dwelling girl, Oily Girl, sliding onto the scene!" is actually a pun. The 'Abura sumashi 油すまし' in her battle speech '油すましの娘、油娘！ぬるっと行くよー。' is a reference to her dad, a youkai from Japanese folk tales called the oil presser. Funnily enough, it's translated accurately in the non-official translation by Takajun, "I'm Aburako, daughter of Aburasumashi! Let's be oily!". It's also a pun though, so the MG version isn't wrong, just uses an alternate meaning.

Despite her youkai origins, Oily Girl is likely Saitou Dousan's adopted daughter considering the shared family name and the fact that Dousan is stated to have disappeared from Mino at the same time that Choushin banished Saitou.

One theory from her battle lines (and possibly other sources?) is that Oily Girl and her father, the oil presser were part of Omachi's faction during the Great Youkai War (this explains why she protests to Omachi in battle that she lives freely). Aburako's dad died, hence her line about challenging Masamune. Orphaned during the war, Saitou Dousan adopted her, and brought her to Mino, where she became heir to the oil merchant turned feudal lord (Saitou Dousan, the historical figure who is mentioned by name, but doesn't have an appearance).

A noble in Mino, the Dousan family's subordinates are the Mino Triumvirate, Stubborn Ittetsu, Cucumber Andou, and Takuan-sama, commanders who can be recruited after conquering the Mamushi Oil province, and who 3G holds in high regard and are requirements to recruit Oily Girl.

In another event involving the triumvirate, the three discuss whether or not to accept Ashikaga Choushin's request that they fight for him. Of note, Cucumber reflects on how he loves eating cucumber with the greasy food that Oily Girl Dousan used to make before she disappeared, abandoning Mino because of Choushin's banishment of the Saitou Clan just before the events of Sengoku Rance.

The meaning of "Oily" should not, however, be taken solely as a reference to greasy food. From her lines, and the 'Oil Cave (uses the Japanese word for petroleum)' dungeon in Mamushi oil field, we can confirm the Oily in her name to have a double reference to grease, as well as to petrol. Dousan's line about her father the Oil Presser, might also be a pun for 'oil dweller' as it was translated in MG version. We can also see the references to the sea and her scuba gear as having something to do with oil spills (see trivia on her original appearance). 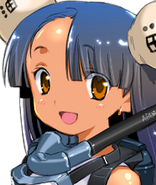 A poster for the fake game "Oily Girl's Heart-Pounding Adventure At Sea" from the Alicesoft blog.
Add a photo to this gallery