The AL Church is the largest and most prominent religion in The Continent. It worships the Goddess ALICE, infact the full name for the religion is actually The ALICE Church (ALICE教, ALICE-kyō), but it's mostly refered to as AL Church. The official title of the Pope is Mulalaloux (ムーララルー, Mūrararū) who speaks for ALICE and spreads her message to humanity. The church forbids any kind of self-indulgence, such as having sexual intercourse or drinking alcohol.

The AL Church is accepted as the standard religion of the Continent, the doctrine is taught in schools and ceremonies such as weddings or funerals are performed by AL priests. It tends to profess that you should love your neighbor and that following its doctrine leads to the path of happiness, salvation and a peaceful afterlife. This is actually false, since every soul returns to Ludo-Rathowm upon death (unless it's stolen by a Devil or from a ritual performed by the Tenshi Sect).

The Church is funded through donations from every nation and has no primary form of money generation, but since it's the most worshipped religion in the continent, that's hardly a problem. The influence of the religion is prevalent in all the countries of the main continent, and waging war to them would result in the masses from all over the world rising to fight for their beliefs.

The AL Church Headquarters are on the island of Kawanakajima in the religious city known as Kaiz, where the Pope and Bishops comfortably live. They also have their own military of Temple Knights dedicated to hunt mostly Devils and Necro-mages, since death magic is considered a taboo art that should never be practiced. Even a light-hearted priestess like Sel Catchgolf is very serious with this matter. The Temple Knights are considered one of the most formidable armies on the Continent due to how massively supported it is. It is not affiliated to any kingdom in particular but spread all over the Continent and no nation wishes to go against them in any way due to the massive amount of backlash it would receive from its many scattered supporters.

There is a special room dug into the basement of the AL Church Headquarters, it goes very far down, but once you reach the bottom you are able to communicate with Goddess ALICE herself. Only selected people, typically only the Pope, are allowed here. The Goddess ALICE tells the Pope when a new Demon King makes appearance, which allows the information to be relayed to the rest of the world.

The AL Church is also responsible for the year abbreviations in the calendar such as LP. 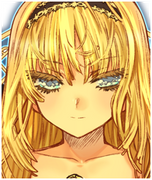 Am Isuel: Pope two generations ago.

Elizabeth Des: Priestess that worked for the Pope.